Thanks to Thomas Cheatham <tec3@utah.edu> and Brian Haymore <brian.haymore@utah.edu> at the Center for High Performance Computing) at the Univ of Utah for directing me to rclone on the XSEDE Campus Champions list and providing corrections and missing information to this document, tho remaining errors are mine. Also thanks to Vikram Gazula <vgazu2@uky.edu> at the Univ of Kentucky for providing hints about optimal use of rclone. Much appreciated.

You can attach your Google Drive to the HPC cluster as described here. However, while the convenience is good, the bandwidth is pretty bad - on the order of 3-5MB/s.

Below, I show how to push data back and forth to your Google Drive (or Google Storage or Amazon S3) at much higher rates using rclone. You can still access your files on HPC via the mechanism described above, but the bulk movement of data can go much faster, enough to use your Google Drive as a functional backup to your data on HPC, if formatted correctly.

Note that your interaction with Google Drive as described above and your interaction with it via rclone is independent. You can refer to and manipulate files via rclone without a Google Drive mount on the HPC Cluster and vice versa. Similarly, if you are interacting via both mechanisms simultaneously, there will usually be a short delay as the updates propagate thru the system.

There are some GOTCHA’s. In order to maximize your bandwidth, you’ll have to move lots of data at once, in parallel, optimally organized as multi-GB files. Also, Google Drive only allows 2 files/sec to enter or leave their storage cloud, so if you’re trying to transfer unmodified ZOTfiles, you’ll be waiting a long, long time.

UCI’s agreement with Google gives every UCI-affiliated person 10TB of space on Google Drive. In fact, that limit is not (currently) enforced; I have pushed 125TB to my own Google Drive without objection (yet) from Google. The problem with that agreement is that the speed at which you can push the data is very low - on the order of 2-5MB/s, via normal connections.

Since we now have a 10Gb/s interface to our high-speed research DMZ (aka Lightpath), we can exploit that high-speed connection to UCI’s Internet Service Provider (ISP) CENIC to enable data transfers to Google Drive at much higher speeds with a fairly new utility called rclone that can increase bandwidth dramatically. 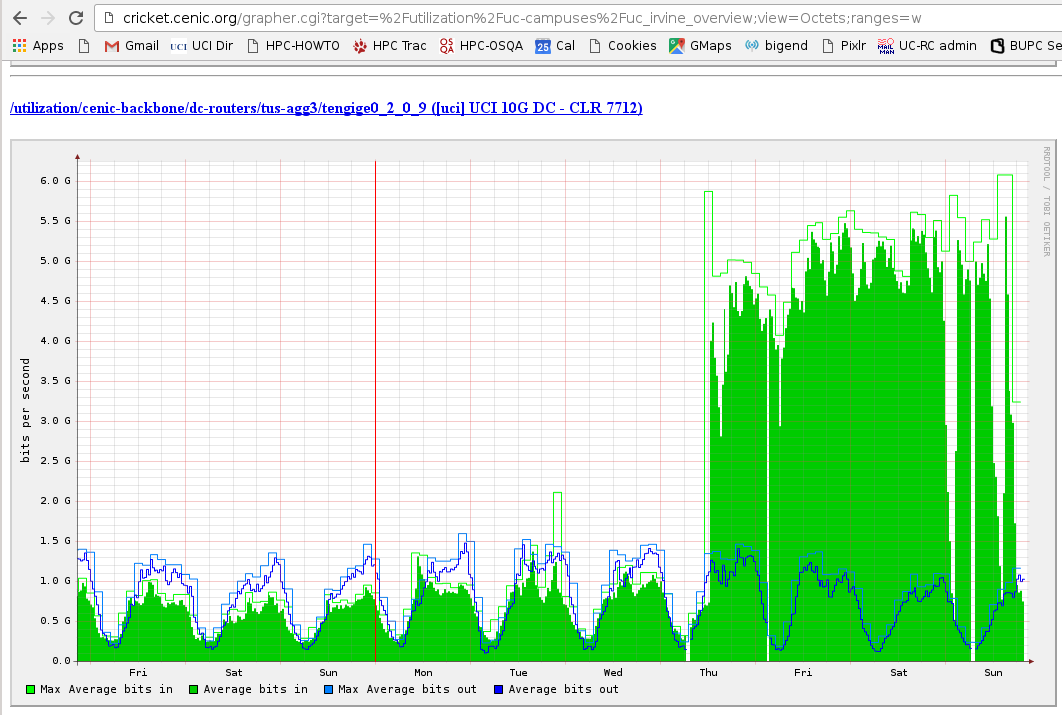 rclone is written in Google’s Go Language, sort of a cloud version of rsync and is installed on HPC for everyone to use. It requires you to set up an authentication with Google (or other cloud service) prior to the data transfer and thereafter maintains that authentication in your %7e/.rclone.conf file. DO NOT LEAVE THIS FILE READABLE BY OTHERS.

Use of rclone is surprisingly straightforward for the amount of under-the-covers authentication it does and supports not only Google Drive, but also Amazon Web Services and a number of other cloud service providers.

The following is an annotated transcript of the rclone config command.

So now you’re ready to go with the remote that you just enabled. You may be able to interact with all the remotes listed, but you’ll have to make sure that you’re authorized with all of them.

I reference my Google Drive as gdrv in rclone, with directories specified after a : ie:

so in order to see what’s on my Google Drive via rclone, I’d type:

BE CAREFUL: ls and lsd are VERY different commands. rclone ls will recursively list ALL files on your gdrive, which, if you’ve pushed 120TB of files, may be a very large list. rclone lsd remote: will list only the immediate directories.

rclone-browser is Qt-based wrapper around rclone which makes it much easier to view and select files to push and pull.

You still have to go thru a TERMINAL-based configuration sequence as above to add new Remotes but once that’s done, it provides a File Browser-like interface to moving files back and forth.

If you’re coming from the Linux world, you will expect to be able to select files via globbing. rclone supports glob-like regular expression (regex) pattern matching, but you can’t do "normal" globbing selection with rclone, altho it does allow the use of globby-like filters which allow you to do a similar kind of filename pattern matching. However you have to format the glob differently than you normally would in a bash or grep regex.

For example, I have image files with suffixes of both .jpg and .JPG in my gdrv:boards/sayas dir. If I wanted to list only the ones ending in .jpg in bash, I would use the familiar construction:

In rclone, you have to separate the regex from the remote:dir specification:

To put data into your Drive using rclone, you use the copy command. Initially, try it by itself:

so to copy a 4MB file to Drive took 70s or 0.06MB/s, pitifully slow. A larger (25MB) file takes 2m23s or 0.17MB/s, better but barely. This reflects the large amount of overhead that such transfers take on a single transfer. For a much larger file (1.7GB), the instantaneous transfer tops out at a much better 17MB/s (with the average dropping to about 10MB/s, counting the initiation/termination overhead), but that is about the max that you’ll see on a single file transfer.

To obtain good transfer rates, you have to increase the number and size of files you transfer at one time, as well as the number of simultaneous streams and the checkers (the processes that are checking the streams).

For example, if I have 64x 10GB files (626GB) to transfer in parallel, using an increased number of both streams and checkers, I can dramatically increase the bandwidth:

So, for rclone to transfer files efficiently, there has to be a large payload per transfer and a number of simultaneous streams. It works best if there are large, identically sized files, but regardless, larger files are better, because of the initiation overhead.

The reverse mechanism - retrieving data from your Drive repository is essentially identical, with the source and target swapped:

I didn’t think this could be done, but a need for sequence that had been stored on a Google Drive pushed me to try it. I suspect that the sharing was set up promiscuously (Share with anyone at blah who has this link) and if done correctly (Share only with these people), I would not have been able to do this. Nevertheless…

A grad student had obtained a sequencing set of a couple hundred GB, had backed it up on a shared Google Drive to which the PI had shared access. The GS then went incommunicado. The PI had tried downloading to her Mac via wifi over the commodity Internet, which did not end well. She needed the dataset on our HPC cluster for analysis and I ended up in the mix.

I updated rclone and rclone-browser on the cluster, and tried to use the link to the shared Google Drive to convince rclone to show me the data but that was a dead end. The link looks like this:

and that hash is irreversible of course. I thought there might be a way to insert it into the rclone config file, but that also led to madness.

However, Google Drive now has a mechanism to link Shared with me drives in your My Drive view from the web interface.

This is the Google Drive folder that was shared with me: 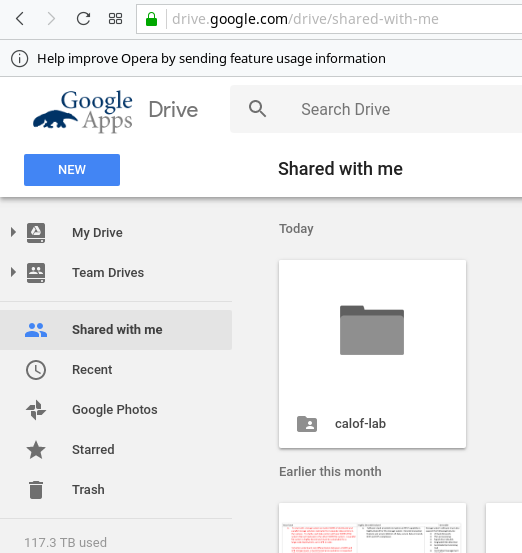 I was able to right-click on the folder and select Add to My Drive, which now adds a symlink to My Drive so I can see 'calof-lab in the same level as other top-level folders: 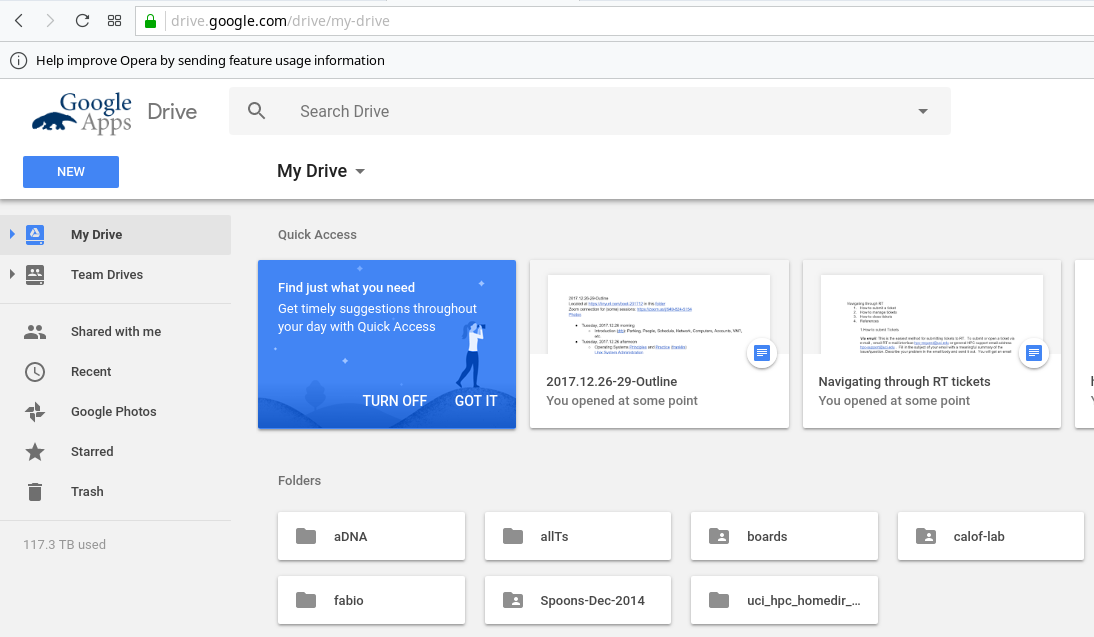 Here’s the view from the rclone-browser now: 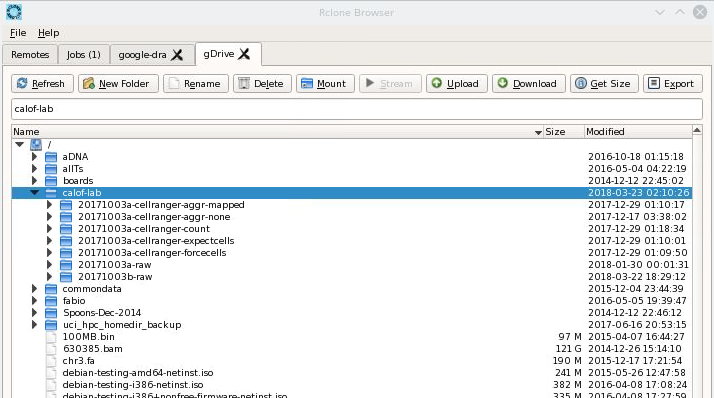 Note that it also shows up with the commandline rclone:

From there, it’s just a matter of selecting the correct folder in the rclone-browser and clicking Download or optimizing the download with commandline rclone. On our 10GbE LightPath DMZ connection, the sequence files came down at >10GB/m, but then slowed waaayyyyyyy down when the small analysis files were hit. It looks like it’s finishing off at 0.2 KB/s. Ugh. But possible.

The limits on Google Drive upload and download limits are unclear. I’ve seen 750GB/day mentioned, but have also seen others and was personally able to transfer about 100TB (incl. files >100GB) over a weekend, tho I am covered under an academic agreement that may be more flexible. Here’s one thread that includes an (unofficial) take from a purported Google Engineer. There does not seem to be a download limit that I should have hit, but there was a very long tail to completion.

9. File administration on the remote end

rclone also supports manipulation of the files on the remotes. None of these commands are as easy or as fast as manipulating a local file, but if you have to interact with a remote file objects, they are usable.

Please see the rclone usage documentation for how to use rclone for remote file admin.

…not about pastries, but about how to automate the upload and remote use of uploaded files. Because rclone needs many, large, identically-sized files to upload for best bandwidth utilization, it would be useful to design a script that would do this automatically for a given starting set of files and dirs.

There is a very good, portable utility called fpart that will recursively aggregate files into groups by size or number for feeding into other utilities', so the sending is not the problem. The problem is in the use at the remote end. Local files end up as partially split aggregates or approximately same-sized tar files remotely, and there does not seem to be a utility as part of Google Drive. There may be a second source - Drive Unzip that allows the remote pulling apart of such files. The only other mechanism of doing so seems to be to spin up a Google VM to manipulate the data on the remote end or use a Google API to do the same, as Drive Unzip may have done.

If anyone else has a good idea of how to do this, please let me know.

You are welcome to re-use all or parts of this document for your own use, with or without attribution. The current version should always be available here, with the AsciiDoc source available here. The commented lines at the top show how to compile and send it to its distribution site.